Gdańsk and its neighbourhood in painting

Gdańsk and its neighbourhood in painting

Gdańsk and its neighbourhood in paintings from 17th to 20th century.

Gdańsk, Elbląg, Tczew, Kwidzyn, Malbork. The towns of today's Pomerania used to be the place where many exquisite painters originated from. They were of different nationalities, spoke German, Polish and Latin, but they all contributed to European art of their epoque. In August, the artworks of the Pomeranian masters can be seen at St. John's Centre.

The exhibition presents selected paintings from the private collection of Andrzej Walas. The rich collection could make for whole department of a museum. In recent years, some of the masterpieces were presented at 8 prestigious art galleries in Pomerania. The Baltic Sea Cultural Centre presents 50 artworks – the newly bought ones and the ones from the previous exhibitions. The ambition of the curators was to present the broadest possible range of the local painters, including the ones from Gdańsk neighbouring towns: Kwidzyn, Malbork, Tczew and Elbląg.

"Elbląg is the place where majority of exquisite painters, such as: Berthold  Hellingrath, Harry Schultz, Emil Gabel, Dora Grabosch or Erich Scholtis came from. Another interesting place was Kwidzyn, home of no less famous artists: Thuro Balzer, Gustav Meissner, Wilhelm Carl Räuber, Eugen Windmüller, Ernst Kolbe or Georg Knorr. The neighbouring Malbork, on the other hand, was the place where a fine German expressionist, member of the Berlin Secession Bruno Krauskoph (1892-1960) was born. He was a great artist whose life spanned between Germany, Poland, France, Switzerland, Norway, USA and returned to Berlin, Germany where he lived before his death. Next, Nowy Staw near Malbork is the place of birth of Eva van Blericq, illustrator and graphic artist who studied in Gdańsk and Leipzig. Not far away from there, in Sztum, Robert Assmus, painter and graphic artist was born. Another well-known representative of the German Academia came from Tczew. It was a landscape painter, Alfred Bachmann, a regular at the greatest European art auctions and student of prof. Maximilian Schmidt of Königsberg Academy of Fine Arts. Tczew was also hometown of painters Dorota Stroschein and Theodor Dietrich.

We will see paintings created by artists who were perfectly educated, spoke German, Polish and Latin. The exhibition presents a broad spectrum of different trends in painting, artworks of quite diverse character aesthetically and artistically. Majority of the paintings are those which could have been pleasant to the eye and decorate houses of wealthy citizens. But the main ambition of the collector is to acquire pieces of high artistic value, such as the newly purchased works by Robert Reinick, Wilhelm Alexandr Meyerheim, Eduard Hildebrandt, Alfred Bachmann and Julius Gottheil. They are all painters valued in European world of art and highly listed at auctions.

It is worth noting that war and its consequences interrupted the tradition of art collecting in Pomeranian region. The post-war degermanisation after the Free City of Danzig era excluded some phases of Gdańsk art and stopped its natural development process.
A few significant facts from the 19th century city life played a huge role in formation of Gdańsk artists. It was the establishment of: the King's School of Arts and Artisan (Königliche Kunstschule) in 1804, the Peace Association in 1816, the Arts Association in 1835, the Old Buildings and Art Monuments Protection Association in 1856, and the City Museum in 1872. The leader of all these actions was Johann Carl Schultz, an exquisite painter and graphic designer deeply in love with Gdańsk.

These favourable conditions for art in the challenging 19th century had great impact on education of numerous artists in the region. Majority of them returned to their hometown Gdańsk after graduating from reknown European academic centres of their time. Here comes the question: to what extense the experience of these artists enriched the regional art development? Perhaps the exhibition at the St. John's Centre will help find the answer to this question. Andrzej Walas' rich painting collection can be a continuation of the old traditions of private collections of Gdańsk citizens, most of which were disparsed. Undoubtedly, the exhibition refers to great collections of Jacob Kabrun, Friedrich Basner or Lesser Giełdziński. Andrzej Walas, the collector of grand passion, follows the auctions of the greatest European auction houses. He searches for unique masterpieces connected to the region and brings them to Gdańsk where they belong." 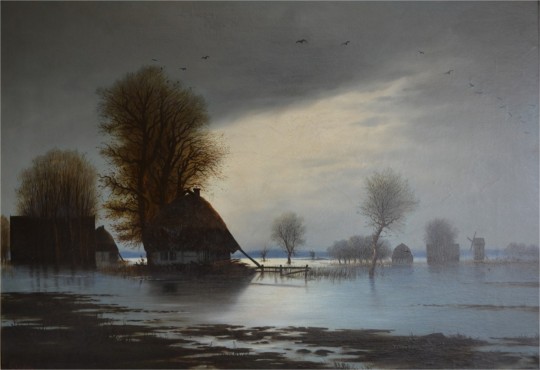